The architectural reference to the Taj Mahal is immediately discernible as you enter the Microsoft office in Noida, northern India.

Bathed in ivory white and punctuated with beautiful arches and “Jaali” – perforated lattice screens – the office is both a visual ode to the grandeur of the Taj Mahal and a state-of-the-art workplace.

Streams of light perforate the intricate Jaali screens, creating a sublime effect of lighting and depth. Along with energy-saving lights, this architectural feature helps keep the building’s carbon footprint low and is one of the reasons the office has a Leed (Leadership in Energy and Environmental Design) platinum rating, the US Green Building Council’s highest sustainability certification.

The term Jaali, meaning net, is used in Central and South Asia. Cut from marble or red sandstone in ornamental patterns, jaali was a distinct architectural feature in India between the 16th and 18th Century. The exquisitely carved jaalis of the Taj Mahal, built in the Indian city of Agra in the mid-17th Century, create a rhythmic blend of solids and voids, concave and convex, lines and curves, light and shadows. The Hawa Mahal, or “Wind Palace“, built in 1799 by Rajput rulers in Jaipur, has 953 windows with lattice screens designed to let in a gentle breeze.

As well as adding artistic flair to buildings, these lattice screens “allow the air to circulate, protect [the buildings] from sunlight and provide a curtain for privacy,“ says Yatin Pandya, an architect specializing in heritage conservation and author of several books about sustainable design.

Now, in their search for sustainable cooling solutions, architects are reviving this ancient design to construct comfortable, low-carbon buildings.

Cut from marble or red sandstone in ornamental patterns, jaali was a distinct architectural feature in India between the 16th to 18th Century. (Credit: Getty Images)

The building sector has a major climate problem. Emissions from buildings hit their highest-ever level in 2019, accounting for 38% of global CO2 emissions. Cooling buildings can be especially energy intensive – and the number of air conditioning units is expected to more than triple worldwide by 2050, consuming as much electricity as all of India and China today.

At the same time, heatwaves are becoming longer and more intense around the world. India in particular experienced a series of intense heatwaves this year, with temperatures reaching a record 49C (120F) in Delhi in May.

Facing rapid urbanization and soaring heat, India is now searching for sustainable, clean and energy-efficient cooling solutions. In 2019, the Indian government launched the India Cooling Action Plan, outlining actions needed to provide access to sustainable and energy-efficient cooling. The plan emphasizes the importance of passive cooling interventions – the manipulation of architectural elements for cooling – to boost climate resilience and reduce the urban heat island effect, where buildings and roads absorb and retain heat.

In their search for sustainable cooling solutions, architects are reviving Jaali design, which dates back to the 16th Century (Credit: Getty Images)

Jaali cuts the direct heat entering in a building by breaking down the total square metres of a typical window into a number of small holes. In traditional Jaali, the holes are almost exactly the same size as the thickness of the marble or sandstone, says Pandya. “This thickness works to reduce the direct glare of sunlight while allowing diffused illumination,” he says.

Jaali’s cooling feature relies on the Venturi effect in a similar way to an air conditioning unit. “When air passes through holes, it picks up velocity and penetrates afar. Due to the small apertures, air gets compressed and when released it gets cooler,” says Pandya.

The rise of modern cooling techniques restricted the use of Jaali, but “global warming concerns are shifting the focus towards its revival,” says Pandya. “Traditional architectural forms have proven their performance in combatting environmental conditions.”

From the Times I-City complex in Foshan, China, to the Nakâra hotel in Cap d’Agde, France, to Cordoba Hospital in Spain, lattice facades have been deployed in modern buildings to modulate natural light, optimize energy consumption and provide comfort.

“Perforated facades are globally becoming popular among architects with a focus on sustainable envelopes,” says Ayesha Batool, a researcher in sustainable building design from the University of Nottingham in the UK. A 2018 assessment by Batool of three-screen shading systems found that Jaali outperformed both fully glazed facades and brise-soleil facades, which deflect sunlight.

“Jaali screens enhance the thermal and visual comfort of occupants inside the building,” says Batool. “It is important to learn from traditional architectural methods without over-generalizing and romanticizing their performance.”

The Al-Bahr towers in Abu Dhabi have a kinetic Jaali facade, which is inspired by the texture of human skin (Credit: Alamy)

“The double jaali screen reduces the outside air temperature in front of the glass so that colder air is pulled inside, acting like a chimney,” says Knobel Gupta. “This reduces the load on the air conditioner.“

The project used digital simulations to generate different porosity patterns for each wall, depending on how much sunlight it receives. The north-facing facade, for instance, has a 81% opacity, compared to 27% opacity on the south side. The jaali also helps the building meet the needed lighting level naturally, she adds, ensuring no artificial lights are required during the day.

Another modern building which uses Jaali effectively is the student accommodation block of St. Andrew’s Institute of Technology and Management in Gurugram, India.

One notable feature of the building is its application of a physics principle called the “stack effect”, whereby the rotation angles of each brick in the jaali are designed to minimize solar radiation. “The Jaali facade acts as a thermal protection shield, reducing direct sun glare by 70%, thus minimising heat gain,” says Rastogi, who designed the building. The building captures hot air and releases it outdoors.

The jaali has significantly lowered energy bills, and reduced the need for the air conditioning by 35%, says Rastogi. 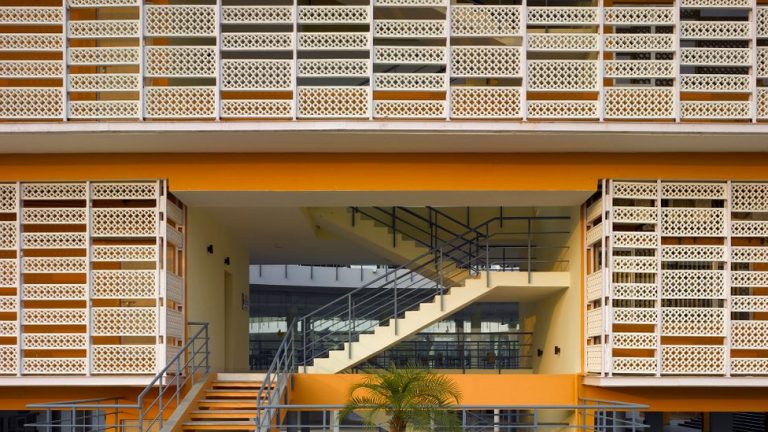 Other countries are also taking note of the benefits of jaali. The Hispasat Satellite Control Centre in Madrid, Spain, was similarly designed with the objective of controlling solar radiation and increasing indoor comfort. Its lattice offers three different densities of openings, which help filter light and reduce the Sun‘s glare.

“The facade is finished with a second skin consisting of a 5mm- [0.2in-] thick metal sheet,” says Juan Herreros, architect and founding partner ofEstudio Herreros, the firm that designed the building. “[The] degree of perforation varies according to the lighting needs for comfort and the need to dissipate the Sun‘s radiation.“

A one-metre (3ft) gap between the building and the lattice produces a shaded and ventilated chamber effect, he adds. “The space between the two skins acts as a ventilation route.”

Although Jaali is experiencing a revival, there are some caveats to overcome.

Technological advancements have made the jaali ever more dynamic. Drawing from biomimicry, the science of developing non-biological systems inspired by nature, dynamic jaali facades aim to mimic the methods of thermal adaptation found in nature. Inspired by the texture of human skin, these facades are helping buildings to breathe through thousands of pores.

Al-Bahr Towers, which sits in the intense desert sunshine of Abu Dhabi, have such a kinetic facade. Designed by UK-based Aedas Architects, the towers have a responsive “intelligent“ facade which opens and closes depending on the temperature. The design takes cues from jaali and mashrabiya, a counterpart from the Arab world, which usually uses wood.

“The mashrabiya is a novel system that reduces the amount of direct sunlight on the building by about 20%,” says John Lyle, a former director at engineering consultancy Arup, who advised on the opening mechanism. “The motorized mashrabiyas open and close in response to the Sun’s movement to allow indirect natural light into the building.”

The dynamic screen is placed two meters (6.6ft) away from the building and programmed to respond to the Sun’s movement in order to reduce glare and improve daylight penetration. As the Sun moves, the entire mashrabiya moves with it to provide shading. The design has resulted in a 40% savings in carbon emissions, according to Arup.

Although jaali is experiencing a revival, there are some caveats to overcome. There are concerns about whether holes in the facades shield occupants enough from pests and insects. To avoid this, a glass or pest screen can be placed in front of the jaali.

Meanwhile, moving or kinetic facades often involve time-consuming design and fabrication processes and are expensive as they involve technological investment. However, the benefits open a gateway for further explorations in order to optimize energy efficiency.

Using traditional building materials, such as marble, for modern construction may not be viable or cost-effective, and one material may not suit all climates. Most jaalis today are made of medium-density fiberboard, concrete, bricks, wood, stone, PVC or plaster.

In dry regions, materials such as wooden fibers are added to improve humidification. In a similar process to evapotranspiration by plants, wind passing through the cooled jaali holes at night leaves moisture which is absorbed and released into the air during the day when it is hotter.

Jaalis also differ in their performance in different climates, meaning that screen design, geometries, perforation, form and materials must be based on climate conditions: there is no one-size-fits-all solution. Jaali screens where 30% is made up of holes with a depth of 10cm (4in) achieve a better thermal comfort in a hot-arid climate, for example. In hot-humid climates, the perforation ratio may need to be increased.

“Traditional jaali technique holds the key for creating environmentally and economically viable architecture,” he says. “Sustainability is not an added construct; it should be a way of living.”

If you liked this story, sign up for the weekly bbc.com features newsletter, called “The Essential List” – a handpicked selection of stories from BBC Future, Culture, Worklife, Travel and Reel delivered to your inbox every Friday.