The U.S. safety net was built for cold winters. Hot summers threaten it.

By Dino Grandoni and Anna Phillips

Melissa Besong, 40, outside the NeedLink Nashville offices after filling out an applications to keep her electricity from being cut off. (William DeShazer for The Washington Post)

NASHVILLE — The moment NeedLink Nashville opened its doors just after Labor Day weekend, Melissa Besong entered the nonprofit’s office holding her overdue electric bill. Four months after losing her job as a home health aide, she didn’t want to miss out on a chance to keep her power running.

“Hopefully,” she said, shut-off warning in hand, “they’ll help me out before it’s time.”

The new financial toll of summer shows how government is struggling to keep up with the ways that climate change — during the hottest months of the year — threatens the financial livelihoods of some of the most vulnerable Americans.

This year offers a vivid example. Thanks to pandemic-related funds, the Biden administration was able to more than double the $3.8 billion federal energy assistance program. Administration officials said it marked the largest one-year investment in the program since it began in 1981.

But advocates said about 85 percent has already gone to winter heating bills, which have also soared as global energy prices surged. This left little for summer.

By the time the administration instructed states in July to use the additional funding to subsidize cooling costs and build community cooling centers, many states had already used the stimulus money to pay off the huge debts that accumulated during the pandemic, said Mark Wolfe, executive director of the National Energy Assistance Directors’ Association. Some states had run out of money. Others, like Colorado and Pennsylvania, which focus their spending on heating costs, had closed their energy assistance programs for the summer.

“The dilemma is, we don’t have enough funding to cover both heating and cooling,” Wolfe said. “This is a very serious problem.”

From the Southeast to the Mountain West, leaders of private aid groups and state-run energy assistance programs said they have been flooded with requests for help with electric bills this summer. People who have never asked for assistance before are calling, emailing and showing up at their offices with overdue bills that are double or even triple the amount these groups typically see.

As with rent and food price spikes, the burden of higher electricity bills falls mainly on low-income families who already spend a greater share of their earnings on utilities. In response to the pandemic, the Census Bureau began surveying Americans to see how they were coping with rising energy costs.

An analysis by The Washington Post of survey responses collected from July 27 to Aug. 8 found that nearly 20 percent of households making less than $25,000 said they have kept temperatures in their homes at levels that felt unsafe or unhealthy for some months in the year. This was more common among Latino and Black respondents, regardless of their income, than among Whites and Asians.

Melissa Besong helps her children stay on task with their schoolwork while preparing dinner. (William DeShazer for The Washington Post) 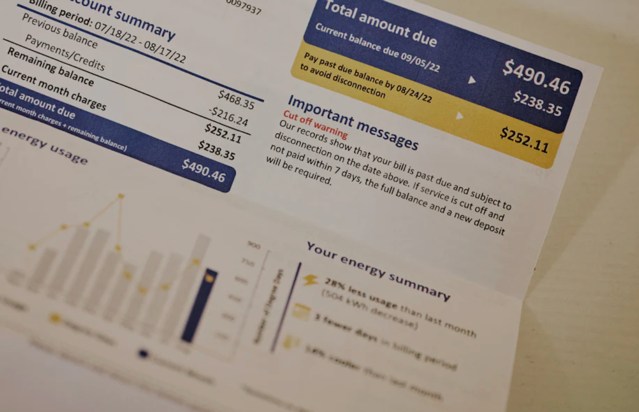 As temperatures rise due to climate change, air conditioning units are using more energy to keep homes comfortable, generating staggering bills and shut-off warnings for those who fail to pay.

About 20 million Americans are behind on their utility bills, according to the National Energy Assistance Directors’ Association, which represents state officials administering energy assistance programs. They owe an average of $800, double the amount before the pandemic.

“It’s definitely the case that cooling costs are not only increasing because of energy prices but also because cooling is more necessary as a result of climate change,” said Diana Hernández, an associate professor of sociomedical sciences at Columbia University’s Mailman School of Public Health.

This July ranked as Nashville’s second-hottest on record. At NeedLink Nashville, the number of applications for assistance this July and August has climbed 25 percent above the pre-pandemic norm, according to its senior program director, Sarah Moore. The organization opens its online application on Monday mornings and shuts it down after 75 requests, the most it can process in a week.

“We’ve been having to cut it off within 45 minutes,” Moore said.

Several factors account for the surge of people in need this year, making it challenging to separate out the role of increasingly severe summer heat. The rising price of natural gas has made it more expensive to produce electricity. Electric bills in August soared 15.8 percent compared with the same period the year before, according to the Bureau of Labor Statistics, the biggest increase since 1981. And though the job market has rebounded from its pandemic losses, many people are still struggling to pay off the debt racked up during that time.

Even before supply chain disruptions and Russia’s war in Ukraine boosted U.S. energy prices, the question of how to stay cool during the summer — and how to pay for it — had become a growing problem for poorer Americans. In the hottest parts of the country, access to air conditioning is not just a source of comfort — for the elderly and people with chronic medical conditions, it can mean life or death.

For 78-year-old Annette Todd Moore, who suffers from asthma and relies on a breathing machine, turning off the AC wasn’t an option.

“I need my air conditioner in my house,” she said while sitting in Needlink Nashville’s waiting room after her electric bill doubled this summer. “With the heat index going up, it’s life and death.”

Annette Todd Moore, 78, of Nashville, was concerned for her health with the rising heat. “It’s life and death,” she said. (William DeShazer for The Washington Post)

Even after Labor Day, the unofficial end of summer, the crickets were still chirping and the temperatures were still balmy in Tennessee. “Oh, my God, it’s so hot out there,” said one woman inquiring about aid before grabbing a cup of water.

Since losing her job this spring, Besong spent time at home, keeping cool and cooking for her 7- and 5-year-olds. To help make ends meet, she cleaned two families’ homes.

Her finicky air conditioner, she suspected, caused her electric bill this summer to skyrocket. “This summer was pretty hot,” she said, holding a bill with an overdue balance of $253. “Most definitely hotter than last summer.”

Lawmakers from New England, whose constituents have historically benefited the most from the federal fuel assistance program, continue to press for more funding. Sen. Susan Collins (R-Maine) and Sen. Jack Reed (D-R.I.) led an effort to warn House and Senate Appropriations Committee members that without the assistance program “we will not meet the needs of low-income families this winter.”

Wolfe and other advocates have urged Congress to increase the program next year above the $4 billion the House and Senate have tentatively agreed to budget. Olivia Wein, a staff attorney for the National Consumer Law Center, said funding must “move northward toward $8 billion” to meet year-round heating and cooling needs.

Kaydence Besong, 5, watches television in her bedroom. (William DeShazer for The Washington Post)

Louisiana is no stranger to brutal summers. A spokesman for Entergy, the largest utility in the state, said this summer delivered some of the hottest weather on record across the four states it serves, “leading to record-level electricity usage by our customers.”

The growing number of days of triple-digit temperatures has put a strain on the energy aid Louisiana gets from the federal government. Even in a year of seeming abundance, when funding is much higher than normal, Hollins said he is about two weeks away from running out of money.

On top of the power price increases and extreme heat, Louisianans are also paying for the latest climate disaster. Since Hurricane Ida made landfall last year, utility companies have passed the cost of power line and equipment repairs onto customers, adding to already bloated electricity bills. And while people living in urban areas can seek refuge in air-conditioned movie theaters, malls and libraries, Hollins said that in rural parts of the state, those options don’t exist.

“I have folks out there that have $600 and $700 energy bills — and they’re low income,” Hollins said. “I think about the access they may have to somewhere just to cool off, when you get into some of those rural areas, that’s just not there. That’s what keeps me up at night.”

In Missouri, energy assistance officials saw such a spike in clients with high electric bills this summer that they doubled the benefit for residents in crisis to $600 — and then doubled it again to $1,200.

While policymakers generally agree that a warm home is essential, some still see cooling as a luxury. Most states have policies preventing power shut offs during the winter, but less than half have similar policies for the summer.

Although many states now offer assistance year-round, a handful still only help residents with their energy bills in the winter. This approach made sense decades ago, Wolfe said, when home heating costs in the coldest parts of the country could be two or three times the yearly electric bill. But today, heating and cooling bills are “balancing out” in some places, he said, while government aid is not.

For some, air conditioning has become too expensive to afford at all.

In Denver, the nonprofit Energy Outreach Colorado said many of the people it serves have never had to own an AC unit. “Now people who would normally contact us because they have a problem with a furnace, they’re contacting us saying, ‘Is there anything you can do to help us with some kind of cooling?’” said spokeswoman Denise Stepto.

During the pandemic, New York City distributed 74,000 air conditioners to low-income seniors isolating in their apartments. Later, when Columbia University’s Hernández surveyed recipients, she found that some were reluctant to use them on the hottest days because of the expense.

In Memphis, about half the average electric bill in the summer is from air conditioning, according to the city’s power company, Memphis Light, Gas and Water. The average monthly price consumers pay just to air-condition their homes surged to $125 this summer, up from $75 in the past two years.

Carter Besong, 7, watches television in his bedroom. (William DeShazer for The Washington Post)

“I’ve seen people not be able to live in their houses this year because of lack of air conditioning, so they’ve gone to live with family,” said Mary Hamlett, vice president of family programs at the Metropolitan Inter-Faith Association in Memphis. “Either units break and they can’t afford to have them repaired or they can’t afford to run them in a way that would keep them cool enough.”

The day after Besong visited the aid office, the lights in her East Nashville apartment flickered off. “I was like, ‘Oh, my God,’” she said. “I was so scared.”

To her relief, it turned out to be just a minor power outage. She soon got the call: The nonprofit would pay off her balance. Going forward, Besong plans to take on more work cleaning homes to help pay the bills.

“I’m going to get the help that I can get now,” she said while air frying chicken patties for dinner. Her daughter Kaydence played at the table while her son Carter worked on spelling homework under the kitchen lights.

“And then after that,” she added, “I’ll be able to give back. Pay it forward.”

Phillips reported from Washington. Emmanuel Martinez contributed to this report.

Check out all of HVACRedu.net‘s NATE-Recognized Training Courses and Programs in our Master Catalog